McAbee Trucking, Inc. has been delivering mail for the United States Postal Service for nearly 50 years. In recent years, Lisa McAbee, owner of McAbee Trucking, Inc., made the decision to move into alternative fuels for the straight box truck fleet, following the lead of the USPS’s sustainability plan. While reducing emissions was a primary goal, McAbee also needed to ensure her fleet would maintain its impeccable reliability with customers and its on-time dispatch rating of over 99 percent by the USPS.

That’s why McAbee Trucking, Inc. turned to propane autogas. As a clean and proven energy source, McAbee is able to lower emissions without compromising on performance and reliability. And the bow on top of it all, the propane autogas vehicles save the fleet thousands of dollars per year in fuel and maintenance costs.

But it’s not just fuel cost savings that have made a difference for the fleet’s financials. Prior to propane autogas, McAbee Trucking, Inc. operated several diesel vehicles that racked up maintenance costs to fix expensive regeneration issues from diesel emission systems. By eliminating that cost with propane autogas, McAbee saves thousands of dollars per year. In fact, McAbee estimates she could purchase three propane vehicles with the amount of money she’s paid to solve regeneration issues in her diesel fleet over the last 1.5 years.

Each propane autogas engine is 90 percent cleaner than EPA standards and significantly reduces nitrogen oxide (NOx) emissions. While this is important for the environment, McAbee said it’s also significant for the health of her drivers who are no longer breathing in diesel’s harmful emissions. This is especially noteworthy when one also considers that propane autogas vehicles do not need to idle in cold weather like diesel vehicles do. While drivers are loading trucks, the vehicle doesn’t need to be running, and drivers aren’t working in a cloud of dirty exhaust. 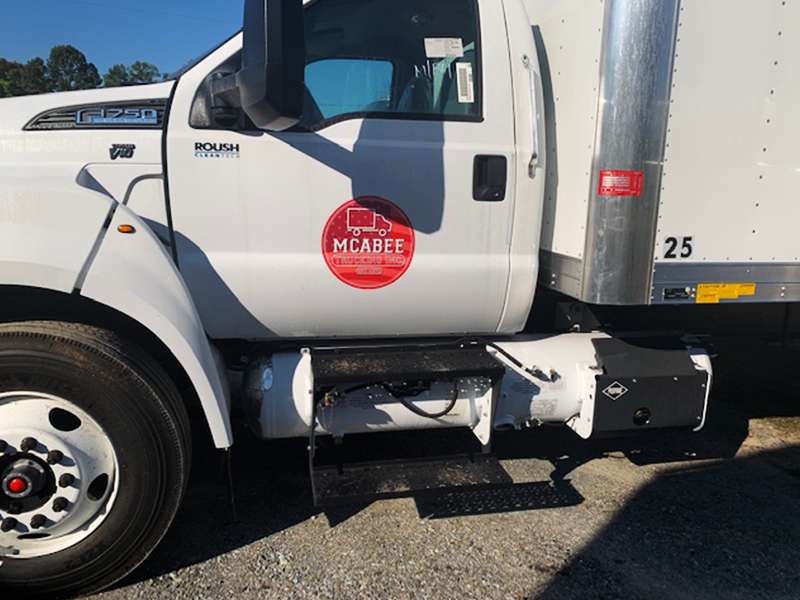 Each year, McAbee Trucking, Inc. runs 1.5 million miles across North and South Carolina, and delivering packages on time is paramount to its success. Since making the switch to propane autogas, McAbee has sustained its impeccable on-time delivery reputation. With McAbee’s new on-site propane autogas refueling infrastructure, drivers can easily refuel without having to wait in long lines, as was the case with diesel. That gives drivers a little extra time to get from point A to point B, which keeps everyone safer.

McAbee also notes that her diesel fleet broke down often, leaving a driver, and several packages, stranded. This is no longer an issue with the less complex maintenance of her propane autogas fleet, and McAbee’s 99 percent on-time dispatch rating remains intact.

After nearly a year on the road, McAbee is pleased with the propane vehicle’s performance. With improved day-to-day operations, reduced emissions, and cost savings, McAbee is encouraging other USPS delivery fleets to transition to this proven alternative fuel.

Cleaning Up the Transportation Industry