Our company, Aperion Energy Group, talks every day to customers in the mining and materials, oil production, refinery and data center sectors about energy usage and how their operations can ensure reliable power through peak demand cycles and at the same time, move toward a low carbon future. A few clean energy sources are well known: wind and solar, but what about applications where land availability is limited?

Solar and wind, for all their benefits, consume enormous land space, so any honest discussion of the future of power must answer a core question: How do we produce large amounts of clean power within a small footprint and at the best possible price to the stakeholders and end users?

Traditional power plants are steadily being decommissioned, and permitting for new gas or nuclear, fraught as they are with NIMBY concerns, remains slow. Even if a new plant could be built for every plant decommissioned, the timeframe required, from planning to startup, is more than five years. Proponents argue the rapid growth of solar and wind will fill the void in grid-level production being opened by decommissioned power plants. Is this plausible?

The primary challenges facing wind are the limited locations with enough wind speed to produce power economically. Wind farms can be built quickly, with the construction schedule from ground break to commissioning at approximately 2-6 months for 10-50 MW. However, the average footprint of 50 acres per megawatt does not scale well against traditional generation technologies. A small power plant is typically 100-200 MW, which would require a set-aside of 5,000-10,000 acres of land for an equivalent wind field. Indeed, 1,776,205 acres would be required to replace just the coal plants that have been shut down since 2015. Additionally, wind power costs $1.3-$2.2 million dollars per MW to install, which is significantly higher than other forms of energy production. It’s a lot to pay for an intermittent source of electrical energy, and one more problem is the as-yet unaddressed issue of decommissioning. The massive fiberglass blades attached to wind turbines are becoming a problem facing landfills.

As with wind energy, solar power is an intermittent source. Even the most efficient solar fields only produce power when the sun is shining and can develop peak power for 6 hours per day under ideal conditions. Efficiency is greatly reduced during winter months, when sunlight strikes the face of the panel at a less favorable angle. Economic efficiency is poor, at $1,000,000 per MW installed. Quality solar panels have a life span of 20 years, but many cheaply produced units currently flooding the market can only be expected to last 5 years. Solar panels also have declining production curves, with new units operating at peak production and dropping due to damage from solar radiation.

A 1 MW solar farm also requires 4-5 acres of land as its operating footprint. Thus, to replace the previously mentioned power plants, you would need 177,620 acres. Like wind turbine blades, a serious problem with solar power is how to decommission the buggers when they have outlived their usefulness. It’s a little-known fact that solar panels are constructed from toxic materials including heavy metals such as lead, cadmium and chromium. When a hailstorm hits and breaks the panels, the rain washes the toxic substances out and contaminates soil and ground water. Some companies are attempting to recycle decommissioned solar panels, but it is a technically difficult and financially weak business model. The bright spot, however, is that recycling solar panels is an emerging market that holds tremendous promise as a growth industry. The first large scale solar installations were installed in the 1980s, so the majority of solar panels are only just now requiring replacement.

Because of their intermittence and their required land footprint, wind and solar can’t be our full clean energy solution. What fills the gap when the sun isn’t shining and the wind isn’t blowing in limited space where reliable power is essential?

The Aperion team has demonstrated a site with up to 100 MW of production within a footprint of only 4 acres is possible and financially viable. At that density, replacing all decommissioned coal plants would only require 1,420 acres.

Propane is the Difference

By using propane as a fuel source we can produce power cleanly, with an auditable 0% NOx emissions. Another benefit of using propane to fuel our power systems is the ability to remotely monitor the fuel supply. This means one less item for your field personnel to inspect while onsite, thereby saving them time and you money compared to traditional, carbon polluting diesel fuel systems. Our economics are excellent as well. At $400,000 per installed MW, the Aperion design is well below the cost of either wind or solar. We have worked with some of the largest utilities and energy producers, with a focus on economics, reliability and deliverability, to prove the effectiveness of this low carbon, high-efficiency system. 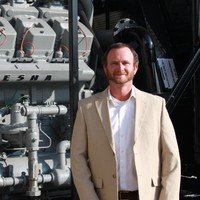 Lyndon Nance is the co-founder of Aperion Energy Group (AEG), a solutions company, whose primary focus is power and water resources for remote locations. They provide custom solutions for Oil and Gas, Industrial, Data Centers, Hospitals and Office Buildings. AEG competes directly with grid power and wins on price, reliability, resilience and service.

The Path to Zero