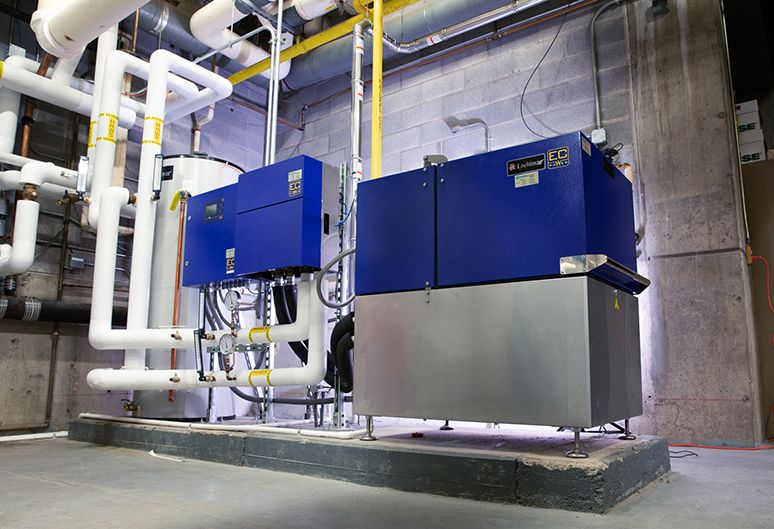 Cathy Ahern has a laser focus on efficiency.

As director of facilities and grounds for Finger Lakes Community College (FLCC) in Upstate New York, she calls on her background as a consulting engineer specializing in HVAC, testing the boundaries of cutting-edge technology. Ahern says, “It was always, ‘What can you do better, as opposed to just making it more energy efficient? Can we push it?’”

Finger Lakes Community College in Canandaigua, New York, reduced its electric bill by an estimated $11,074 per year by generating electricity on site with micro-CHP.

The team developed a cutting-edge solution: integrating a micro-CHP (combined heat and power) cogeneration system that would generate both electricity and hot water, surpassing the energy savings of even the most efficient boilers.

CHP systems have traditionally been associated with large-scale energy users such as manufacturing facilities. The smallest one Coe had previously installed, for example, was a 250-kW backpressure steam turbine generator. Micro-CHP systems such as Lochinvar’s XRGI 25 produce less than 50 kW (the XRGI 25 produces 24 kW and 163,000 Btus of heat), providing a sensible return on investment in traditional boiler replacement scenarios.

“The sizing just matched perfectly with our domestic hot-water load,” Coe says of FLCC’s micro-CHP installation. “We recognized that the size of this hot-water load, if we tied into the domestic hot water and use it for the hot-water reheat, it’s perfect to get year-round operation and really drive the energy savings up.”

Building owners can generate significant energy cost savings by generating electricity on site through propane- or natural-gas-powered micro-CHP units. The EMCOR Services Betlem study estimates the school will reduce its annual electric bill by $11,074 per year. “If we have a typical condensing boiler, that can get up to 98 percent efficiency, and there’s only 2 percent additional energy savings that we could try to achieve for a customer,” Coe says. “But by looking at generating electric off of the boiler, using the waste heat, we can capture a more holistic approach and increase energy cost savings.”

In some ways, FLCC isn’t even the best example of a cogeneration application, since the school has very low electric rates from its utility. Cogeneration projects typically have an ROI of four years or less, but the payback can be significantly faster in areas with a wide “spark spread,” or difference between low-cost propane or natural gas and high costs of local electricity.

Micro-CHP systems also improve a building’s carbon footprint over a typical high-efficiency boiler by generating power locally, rather than purchasing it from the grid, which is less efficient and potentially fueled by dirtier energy sources such as coal. “That is a significant benefit, avoiding whatever the efficiency is at the power plant, as well as the transmission line losses to the point when it gets to the building,” Coe says. “That’s much, much more efficient to generate that electricity on site, which equates to a lower carbon footprint.”

Like just about every university, FLCC has committed to sustainability and environmental goals, but the relevance of the school’s energy-reduction actions are particularly acute given the prominence of the school’s well-known conservation college. Ahern has even lectured for the school’s sustainability class, and one of the professors has integrated cogeneration into his curriculum. “I think that we have a group of students who are very aware because of the conservation program that it’s not just, “Oh, it’s cool,’ but it really becomes part of what they do and what they believe,” Ahern says.

Given cogeneration’s reputation for monstrous plants, Ahern acknowledges that CHP can be a little scary for facility managers. Micro-CHP, she says, takes the same principles and makes it smaller and simpler so that a facility’s technicians can easily understand and control it. That’s becoming particularly critical during the COVID-19 pandemic, as Lochinvar has walked FLCC’s technicians through the maintenance so they can perform it themselves.

FLCC’s system is fueled by natural gas, but as a propane customer at home, Ahern can see plenty of applications for micro-CHP systems in more rural areas. Coe has looked at several projects for dairy farms and breweries that have high year-round domestic hot-water loads where micro-CHP systems would be a great alternative to propane boilers. “Some of the farms around here really struggle to get power into their facilities because they’re located so remotely off the grid,” he says. “So being able to generate power at the same time may help to offset some of the power that’s required from the local utility.”

Lochinvar, which brought its micro-CHP technology to the United States from Denmark-based EC Power, is seeing strong interest from government facilities with emissions reduction goals, as well as hospitality businesses with self-imposed environmental mandates. That was the motivation for one prison in Ohio, which implemented the company’s micro-CHP system to handle the hot-water base load 24/7 and then two additional boilers to meet peak demand. “We’ve run the DOE emissions calculator and the system is equivalent to taking 14 cars off the road or 10 houses off the grid,” says Tommy Olsen, market segment manager at Lochinvar.

Lochinvar’s unit provides supplemental, rather than backup, power — it operates only when grid power is available. But some CHP systems on the market can also serve as a backup power source, enhancing a facility’s resilience during potential grid outages. Olsen suggests facilities and designers visit the U.S. Department of Energy’s Combined Heat & Power eCatalog to search for CHP units by power output, fuel type, physical footprint, and other parameters. Olsen plans to add the XRGI to the database as a propane unit. With several other micro-CHP products in the pipeline at various stages of product development, it’s likely that more products will soon join the list.